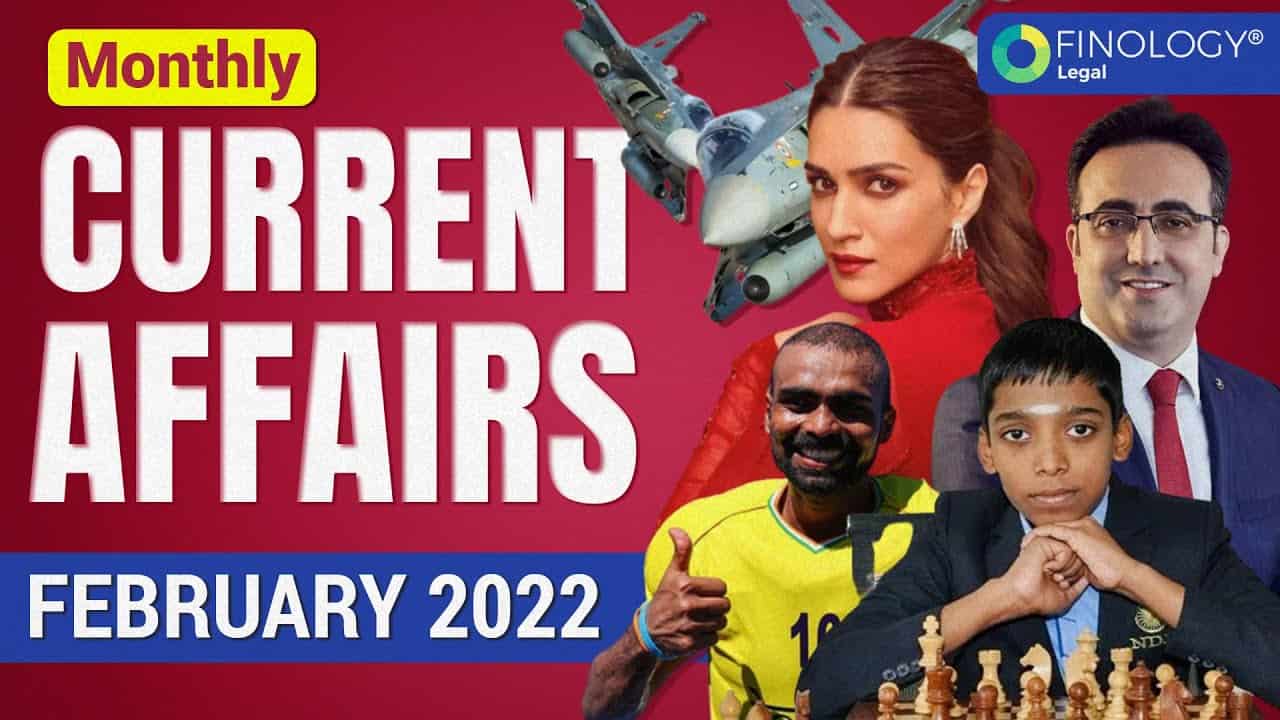 Our todays session we will discusss February current affairs so lets start lets look at the first category of ranking index report if we talk about the first index then that is Internaional IP meaning intellectual property index this is released by Global Innovation Policy of the US Chamber of Commerce India’s rank and score has improved overall and it has been ranked at 43 out of 55 countries if we take top countires into consideraton they are USA, UK, Germany next up is Hurun India Wealth Report by this report in India the dollar millionaire houses have increased by 11% if we compare it to 2020 Any household with a net worth exceeding INR 7 crore then it is called dollar millionaire household and it is being predicted that in the next 5 years it will improve by 30% next is democracy index it is released by Economist Intelligence unit In this they tell about the state of democracy of the entire world it is based on 5 factors and they categorise all the countires e.g.Full democracy, flawed democracy, hybrid, and authoritarian in this india was ranked 46 and was categorized as flawed democracy norway topped the list.

Frank Walter Steinmeier Next is Burkina Faso, which is an African country, whose interim President has been appointed Colonel Paul Henri Sandaogo Lastly, First female President of Honduras(central american country),Xiaomaro Castro is appointed as the 56th president of Honduras Next up is Awards Energy Meet & Excellence Award, which is Organised by ASSOCHAM Coal India Limited has been awarded ‘India’s most Trusted Public Sector Company’ since they handled India Coal Crisis remarkably Next is, Dadasaheb Phalke International Film Festival Award, organised in Mumbai Film of the year Award: Pushpa: The Rise, Best Film Award: Shershaah, Best Actor/Actress Award: Ranveer Singh and Kriti Sanon Next is Late Madhvrao Limaye award, this was given to Nitin Gadkari, who is Union Minister for Road Transport and Highways It was given in category of being an efficient member of the parliament Next is ICC Spirit of Cricket Award 2021, it was given to Daryl Mitchell from New Zealand, fourth New Zealander to receive this award Previously in 2019, it was given to Mr.Virat Kohli of India Next is Laureus World Breakthrough of the Year 2022 Award, it’s an annual sports award which recognizes individuals and teams which was established in 1999, so far only two Indians had been nominated for this award, the third is Neeraj Chopra, Vinesh Phogat and Sachin Tendulkar were nominated earlier Lastly, World Game Athlete of the Year award, PR Sreejesh is the first Indian male to receive this award but before this, Indian Women’s hockey team’s captain Rani Rampal received this award So Mr. Sreejesh is the second Indian athlete to have received this award Alberto Ginez lopez of Spain and Italian Wushu star Michelle Giordano were runner-ups Next category is BOOKS & AUTHORS First The Great Tech Game, which was written by Anirudh, describes roadmap for countries to succeed in technology dominant era Next, The Founders: The Story of Paypal, written by Jimmy Soni, tells the backstory of Paypal’s founders Next is, A History of Sriniketan, written by Uma Das Gupta, tells story of village construction of nobel laureate Rabidranath tagore Next book, How to Prevent the next Pandemic, witten by Bill Gates, tells us how to stop pandemics in future Next is, India-Africa Relations, written by Rajiv Kumar, tells us about emerging role of africa in global affairs Next is, Atal Bihari Vajpayee, written by Sagarika Ghose, biography about India’s former PM Another important book, Golden Boy Neeraj Chopra, written by Navdeep Singh Gill tells us Neeraj’s Gold Medal in Javelin Throw at Tokyo Olympics 2020 Lastly, India, That is Bharat: Coloniality Civilisation and Constituition, It’s a trilogy book, written by J Sai Deepak in which they tell about India’s history in European colonialism.You must have heard about statue of liberty, but do you know about statue of equality ? as to where it’s situated ?

If not , then wait till national new category, and if you like this session then you can enroll in our current affairs course link will be in the description below lets move towards SPORTS Singapore Weightlifting International event was held in singapore, and Indian Mirabai Chanu won gold medal in 55kg category Next up, Youngest Chess player to beat World No.1 (Magnus Carlsen), his name is Rameshbabu Praggnanandhaa who is 16 years old, and third Indian grandmaster to beat Magnus, after Vishwanathan Anand and Pentala Harikrishna Next is, Winter Olympics 2022, which was held in Beijing ,China , Mascot was Bing Dwen Dwen, Indian team’s represntative was Arif Khan, who was flag bearer, Norway topped the medals list, and India didn’t win a medal 2026 Winter Olymics will be held in Italy Next is about the 1st Player to hit triple century in debut, Sakibul Gani of bihar, who scored 341 on 405 balls Next up, FIFA Club World Cup Championship, which Chelsea won by defeating Palmeiras for the first time Chelsea is third English team to win this, behind Manchester United, and Liverpool The final was played in Abu-Dhabi Next is Asian Football Confederation Women’s Asia cup India 2022, this time China won by defeating South Korea, it was 9th edition its’ final was played in Navi Mubai, MVP was Wang Shanshan Next ICC Under 19 World Cup 2022, India won by defeating England, India has won for record fifth time, event was held in Antigua Yash Dhull has become 5th Indian Captain to win this title, Player of the series was Dewald Brevis Lastly, Chennai Super Kings have become India’s First Unicorn Sports Enterprise, its’ market cap is around Rs.76000 crore It’s led by former Indian Team Captain MS Dhoni, who was winner of 2021 IPL Lets move towards important category of NATIONAL NEWS Indian Institute of Technology is projected to setup the first branch of institution outside India in UAE Next we will see, Doorstep distribution of crop insurance policies for our farmers, named ‘Meri Policy Meray Haath’ It will be launched under the PMFBY, and will be launched by Ministry of Agriculture and Farmers Welfare Next up, New India Literacy Programme, under this we are not just talking about adult education, but education for all It’s launched for financial year 2022-2027 by the ministry of education, it covers non-literates of age 15 and above Next is Scheme For Economic Empowerment of DNTs(Denotifed Nomadic and Semi-Nomadic Tribal communities) It’s about backward communities, due to which, for their empowerment cabinets will receive coaching for competitive exams,health insurance and livelihood This is launched by Union Ministry of Social justice and Empowerment Next is important announcement from Indian Government We will replace Diesel in 2024 by renewable energy, we are doing this to become a net-zero emitter by 2070 Next up, we have set a great record in making Longest Highway Tunnel of the world, called Atal Tunnel in Pir Panjal range which is at the height of 10000 ft, it has been recorded by world book of records, it’s close to rohtang pass a 9.2 km long highway Next is India’s first commercial biomass-based hydrogen plant, it will produce 1 tonne of hydrogen from 30 tonne of biomass Now lets have a look at the first country to administer COVID DNA Vaccine, which is India Where they Zydus Cadila produced Zycov-D world’s first plasmid DNA Vaccine and it was administered in Patna Next is Param Pravega, India most powerful supercomputer which is made by National Supercomputing It’s installed in Indian Institute of Science in Bengaluru, Designed by (C-DAC), and has a total supercomputing capacity of 3.3 petaflops Next lets see some new Ramsar Sites, they are made to conserve wetlands, Khajadiya Bird Sanctuary of Gujarat and Bakhira Wildlife in Uttar Pradesh are new Ramsar sites, now total ramsar sites in India are 49.

Lastly, Statue of Equality, It’s made by panchaloha, situated in Hyderabad,Telagana, around 216 feet tall, Saint Sri Ramanujacharya was an Indian Philosopher, theologian, social reformer, and Vaishnava Saint Now, Lets Look at International News, Firstly, Exercise Dharma Gandhi, joint military exercise between India and Japan Next is Milan Exercise, which is biennial multilateral naval exercise, will occur in India, theme is Camaraderie-Cohesion-Collaboration Next exercise Cobra Warrior, this is a multi-nation air exercise where IAF will participate, will be held in UK Next is Bridge 6 Air Exercise, an air exercise between India and Oman Next important news is about Russia, who reently attacked and invaded Ukraine, we have talked about it in this video which you can access from here Next , First Country to deploy India’s UPI Platform, Nepal, and it will helped them tranform their digital economy UPI is developed by NPCI Next First Bank that will enter Metaverse, It’s JP Morgan , which is largest in USA, they opened a lounge in Decentraland Next up First country to allow drones in civil spaces is Israel, UAV are unmanned aerial vehicle which will be used for the benefit of environment, agriculture, public welfare Next important news is about Emergency in Canada, Justin Trudeau invoked Emergencies Act It gives Govt.Power to restrict public assembly, travelling, and mobilization, done to end the anti-vax mandate protests Next which country is India helping to implement a ‘Unitary Digital Identity’ framework, Srilanka It will be implemented as a national level programme Next is Take a break Initaitive, launched by Instagram, for those to take time away from the phone Next is International Space Station, which is going to be retired, its’ first piece was launched in 1998 through a russian rocket and all of its operation will cease till 2031, and will crash in Pacific Ocean-Point Nemo Lastly lets talk about India’s trading partners of 2021, USA has been top trading partner, china has been second, and UAE third and if we talk about prior year, then China was top trading partner.