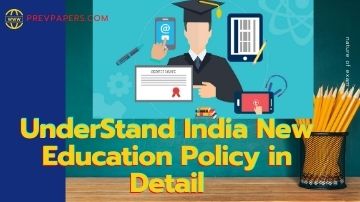 The principles and government policies within the educational sphere also because of the collection of laws and rules that govern education systems’ operation.

Who’s the founder of education and its policies..?

Horace Mann was born on May 4, 1796, in Franklin, Massachusetts, known as the father of education. It is compulsory for all children from ages six to 14 and provided free of charge at public schools in India.

Three main types of education, namely, Formal, Informal and Non-formal and here are 28 States in India as of July 2020.

Who’s is the Education minister..?

The head of the Ministry of Education Government of India is Ramesh Pokhriyal.

With the emphasis on infancy, Early Childhood Care and Education, the 10+2 structure of school curricula is replaced by a 5+3+3+4 curricular structure like corresponding to ages 3-8, 8-11, 11-14, and 14-18 years respectively.

The new policy aims for universalization of education from pre-school to secondary level with 100 percent Gross Enrolment Ratio (GER) education by 2030 and aims to develop GER in higher education to 50 percent by 2025.

Ø Schooling starts at the age of three years now.

Ø Mother tongue as medium of instruction.

Let’s go back to The Nehru government sponsored the development of high-quality scientific education institutions such as the Indian Institutes of Technology. In 1961, the Union government formed the National Council of Educational Research and Training (NCERT).

A “radical restructuring” was proposed in 1968 with equal educational opportunities in order to achieve national integration and greater cultural and economic development.

Rajiv Gandhi introduced a new National Policy on Education known to be the “child-centered approach” in primary education, and launched “Operation Blackboard” to improve primary schools nation established a policy also called for the creation of the “rural university”.

P.V. Narasimha Rao government in 1992 and Former Prime Minister Manmohan Singh adopted a new policy based on the “Common Minimum Programme” of his United Progressive Alliance (UPA) and Programme of Action in 1992, under the National Policy on Education (NPE).

In 2019, the Ministry of Human Resource Development released a Draft New Education Policy 2019, which was followed by a number of public consultations that formed a 10+2 system to a 5+3+3+4 system structure to courageous learning for students based on cognaitive development of children.

Importance of Newspaper for upsc student

The INDIA New Education Policy came into existence on Wednesday, July 29, at noon by the Union cabinet, which is Prakash Javadekar, and Human Resource Development approved the policy that aims t the country’s education system on the NEP- 2020. Earlier on May 1, Prime Minister Narendra Modi had reviewed the NEP- 2020 by former Indian Space Research Organisation (ISRO) chief K Kasturirangan.