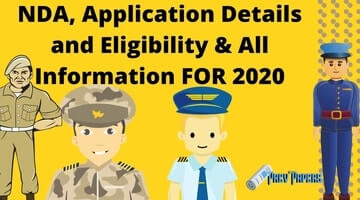 NDA recruitment is conducted for the  admission to the main defence sectors of India. They are  Army, Navy and Air Force and also Indian Naval Academy Course (INAC).

It is conducting twice for per year.

The exam is being conducted in two stages

The date of birth is calculated in accordance with the Matriculation or Secondary School Leaving Certificate and also certificate recognised by an Indian University which is equivalent to Matriculation is considered.

The following countries  are accepted provided they came for permanent settlement in India:

Only unmarried male candidates are eligible for applying the exam. Candidates should not undergo marriage until they completed their training.

Based on written exam, interview, strength and medical tests.

Height and weight for Army and Air force:

People from the following regions have certain exceptions.

Gorkhas and candidates from the region of North-Eastern  hilly areas of India, Garhwal and Kumaon, the minimum height will be 5 cms less than the standard height.

Requirements for the candidates who  wished to join as Pilot:

The distance vision (corrected) of candidates in the better eye should be 6/6 and in the worse eye it should be  6/9 .

Myopia should be less than 2.5 D

Hyper metropia should not more than 3.5 D, it includes Astigmatism

It’s must , for the Air Force candidates to not to wear spectacles

Candidates must not have issues on any one of the following minor conditions.

Regarding limits of the Tattoo:

Permanent body tattoos should be present only on their inner side of forearm, it must be ensured by the Candidates.

They accepts tattoos on the inside of elbow to the wrist and also on the reverse side of palm/dorsal (back)side of the hand.

It is must to ensure that, the permanent body tattoos on any other part of the body are not acceptable.

In exceptional cases like candidates has a background of a tribe, it is acceptable as for them it is customary to have tattoos.

Candidates must have passed certification in Class 12 or HSC under 10 +2 pattern of education from school or equivalent from a recognised board/university.

Candidates must have passed certification in Class 12 or HSC under 10 +2 pattern of education from school with compulsory subjects of Physics and Mathematics under a State Education Board or a University.

Notification : Twice a year in October and  March

Exam :  Conducted in April and august.

While completing with the application form, candidates must have the following documents with them.

The entrance exam for NDA- National Defense Academy consists of a Written Exam followed by Intelligence and Personality test.

2.The general ability test consists of:

Grade and its Pay scale:

5 Reasons, Why we should choose NDA?