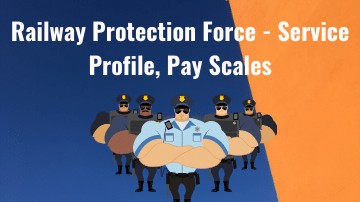 Railway Protection Force is one of the security forces of India, in which candidates can appear after successfully clearing the UPSC exam.

The mail role of the selected candidates is to protect the property and passengers of the Indian Railways. RPF is the only Central Armed Police Force(CAPF) , who having similar powers similar to regular state police forces. The subordinate officers of the PRF were recruited through the examinations conducted by the force itself. The apex of this service is  Director General.

The following countries  are accepted provided they came for permanent settlement in India:

Note : There is relaxable age in category wise.

Maximum no .of attempts:

The RPF, along with the Government Railway Police, ensures the security of passengers and property of the Indian Railways.

The following are the functions of the force:

Special powers given to RPF:

The following powers are given to the officers of RPF, in order to enable them to smoothly discharge their duties:

Grade and its Pay scale:

The salary structure given above has recently updated one as per the recommendations of the 7th pay commission.

Apart from the pay given to them, various facilities were given to officers as per their rankings :