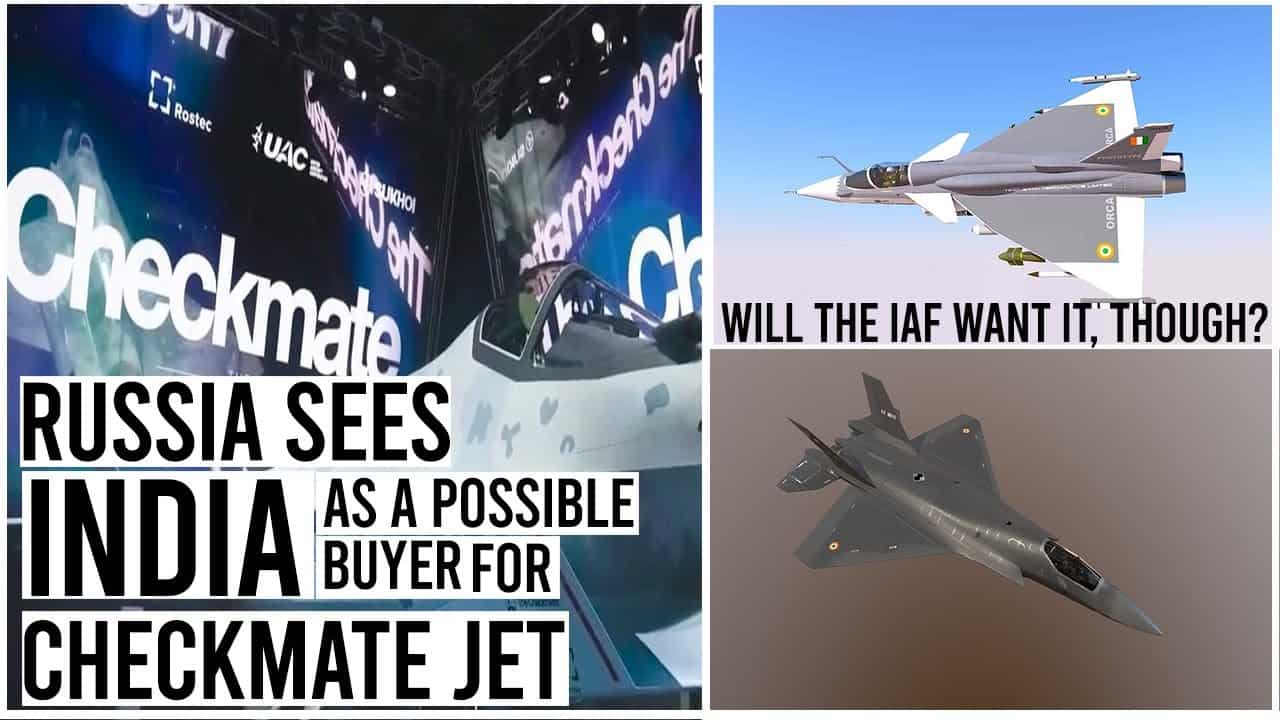 Russia sees India as a prospective buyer for the checkmate jet, but will the Indian air force want it after a week of teasers? Russia debuted the lightweight stealth aircraft known as the checkmate
on Tuesday. The fighter prototype is unique and has never been developed before in Russia about checkmate jets. The checkmate, developed by the Sukhoi design bureau, has yet to be given a formal aircraft designation. The Czech mate has a single engine and is lighter than the Sukhoi Su-57 twin-engine fighter. Sukhoi claims that the checkmate prototype will fly for the first time in 2023, with deliveries commencing in 2026.
Sukhoi also says an unmanned version of the new design is in the works.
According to reports, the new plane can carry up to 7.5 tons of weaponry in internal weapons bases and external hardpoints. The fighter jet also features low visibility and high flight performance, as well as new solutions and technologies. The company described the planes as unique in their class with a combat radius of 1500 kilometers, the most significant thrust-to-weight ratio, shortened takeoff and landing, and more than seven tons of combat load, which is an absolute record for aircraft of this class. The developers of the Czech mate have claimed it will have an automated logistics system known as matryoshka.

The f-35 featured a similar system called Alice, which monitored the aircraft’s performance in flight and sent data back to the maker Lockheed martin Alice, on the other hand, has been criticized for several shortcomings, including the detection of false issues that result in wasteful aircraft grounding. It had also led to concerns about loss of sovereignty among export buyers of the f-35, as the manufacturer would have details of the aircraft’s deployment. The head of Russia’s leading arms export conglomerate, roster, Sergey chemizov, also cited India as a potential buyer chemizov identified India, Vietnam, the middle east, southeast Asia and Latin America as potential buyers. The demand for these planes is pretty high. At least 300 planes are expected shortly.

The initial teaser for the Czech mate project released last week prominently featured an Indian pilot, prompting suspicion that the aircraft might be offered to the Indian air force. Cost chemisov had told reporters that the Czech mate is expected to cost 25 to 30 million dollars for all stealth fighters. Projects such as the US F-22 and f-35 and the Russian SU-57 have seen massive cost overruns and development delays in 2019 when the per-unit cost of the f-35 fighter fell to under 80 million dollars after hundreds of aircraft were built. They were commenting on the price of the checkmate the drive a u.
the website noted the figure of fewer than 30 million dollars that has been presented seems to be wildly optimistic. What will the Indian air force think? On the other hand, the air force of India has committed to developing indigenous projects that include the medium-weight fighter, MWF a single-engine fighter based on the tags and the advanced medium combat aircraft. Amca a larger twin-engine. Aircraft with stealth elements are both part of this program.

The Indian air force has committed to buying 170 to 200 tejas mk2 fighter jets, which will take to the skies for the first time in 2023 and commence production in 2027-28. If hal and DRDO stick to their schedule in an interview to Hindustan times in February, Indian air force chief r.k S Bavaria declared the force was firmly behind the AMCA. The AMCA is scheduled to make its first flight by 2025-26 badaria told Hindustan times that drdo is looking at a timeline of 2027 to 2030 to put the stealth fighter into production. If that materializes, the fighter should be operationally available to IAF as a squadron by 2032.

The Indian air force, according to Bavaria, is interested in incorporating sixth-generation technology into the amca which go beyond stealth.
There is a possibility of equipping amca with directed energy weapons, superior anti-missile systems, advanced missile approach, warning systems and teaming it with unmanned systems. The Indian air force is keeping a close watch on the AMCA and Tejas mk2 program, which will eventually be designed to replace the Indian air force’s primary three fighter types, beginning with the jaguar and mig-29 fleets and ending with the mirage 2000 fleet after 2030. The iaf has set the benchmark for the tajius mk2 program, stating that it must beat the improved mirage 2000 in order to be classified as a multi-role aircraft. Even though the Czech mate is not expected to be ready in time to compete for an Indian air force requirement, but the Russians will use its light tactical aircraft lta to target India’s tajius mk2 program, which is in the same class as the tajes mk2. Even though the TEJAS MK-2 is not designed to be a low observable aircraft, ada designers have acknowledged that it would have a lower radar cross-section than its predecessor.
The tajes, mk1a, hal and drdo not only need to meet various deadlines for the programme, but also ensure that the fifth generation amca program also stays as per schedule to keep Russian Czech mate from harming its local fighter programs. In the long run.