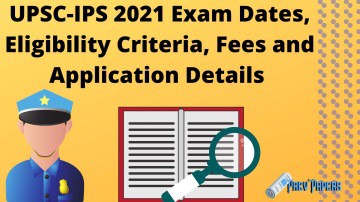 The Indian Police Services (IPS) are one of the three all-India services of the government of India and also a part of civil services examination CSE, conducting each year by the UNION PUBLIC SERVICE COMMISSION. The IPS was formed in the year 1948. As we all think Indian police service is not a security force but also they providing as a commander to take higher-level posts in the state police machinery and the Central Armed Police Forces (CAPF).

Contents hide
1 RECRUITING PROCESS:
2 The IPS exam (UPSC CSE 2020) will be held in three stages:
3 The same dates will be appropriate for next year also 2021.
4 ELIGIBILITY:
4.1 Physical Criteria:
5 Responsibility of IPS:
6 The different work area of an IPS officer
7 Branches in IPS:
8 Salary of IPS:
9 No of attempts in each category:
9.1 Related

There are three modes of the recruitment process:
1.  Through civil services examination conducted by the Union Public Service Commission.
2.through the appointment of State Police Service officers by promotion.

We had another way of recruiting IPS officers which were through limited competitive examination LCE (conducted rarely). However, this method of recruitment was scrapped out,  By the Supreme Court of India on 2018

Through this same exam the government also recruits officers for the following services.

UPSC Personality Test – To be notified

The same dates will be appropriate for next year also 2021.

The IPS eligibility conditions and qualification criteria are:

The aspirant must be an Indian citizen

The physical criteria for the IPS officer is as follows:

The presence of Squint will be in result or disqualification. Spectacles are permitted   but it should be in the range of as follows,

An IPS (Indian Police Service) officer should be responsible in the following areas/sectors:-

The different work area of an IPS officer

The starting basic salary of IPS starts from 56,100.00INR and it various as their destination is given below.

No of attempts in each category: