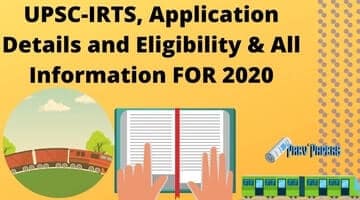 The Indian Railway Traffic Service (IRTS) is one of the Group A services in which candidates can appear after successfully clearing the UPSC Civil Services Exam.

The primary role of this service is to manage and control the transportation department of the Indian railways.

This service is responsible for revenue generation in the railways.

This service is considered as the 5th most coveted among all Group A Civil Services.

The two major divisions of this traffic service

The total cadre strength of this service is around 900.

The following content will be clearly explained the roles and responsibilities payscale,carrer prospects, trainings and posts offered to them.

There are 7 different grade levels comes under this Group A Civil Service.

IRTS officers after a training they will be servicing as Operations Officer and Commercial Officer of the Indian Railways transportation department.