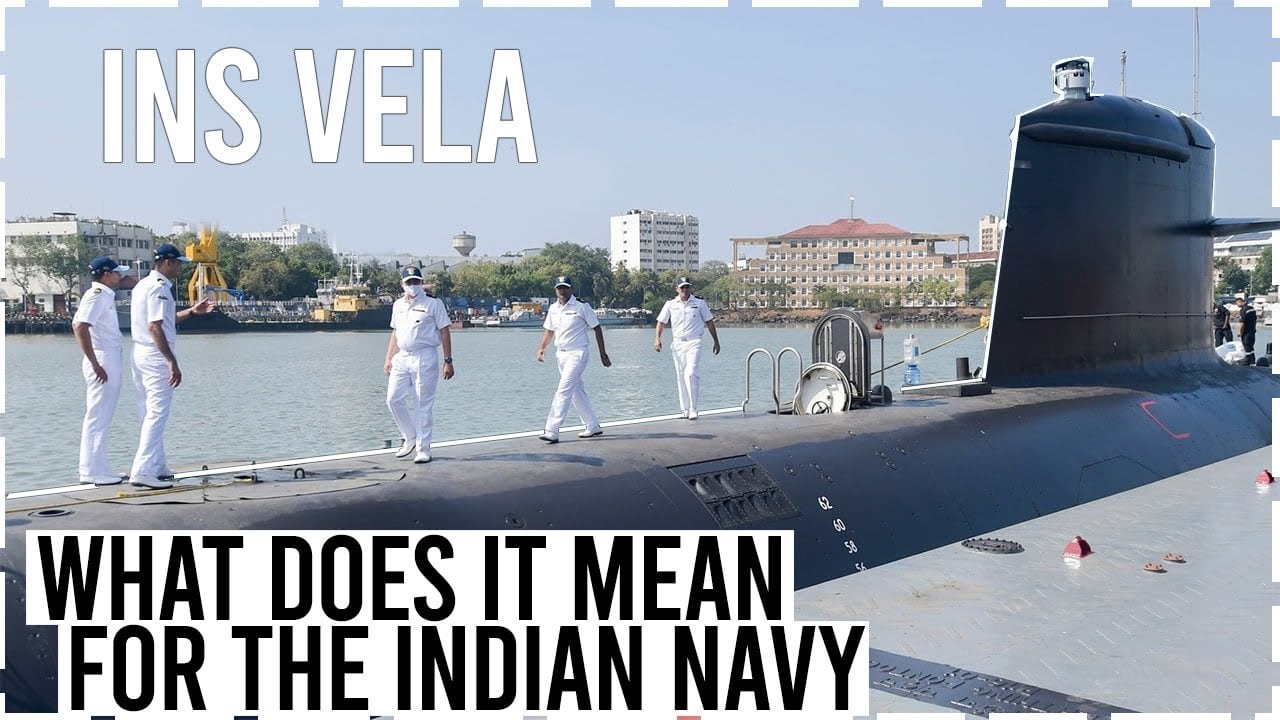 The Indian navy commissioned the ins vela on November 25th, 2021; navy chief admiral karambir Singh commissioned the ins fella at the naval dockyard. This is the second major induction in the Indian navy. In less than a week, India’s first stealth-guided missile destroyer ship ins. Visakhapatnam was inducted into the indian navy on November 21st, [ Music ], the submarines in the project 75 scorpion class are powered by diesel-electric propulsion systems designed to act as sea denial, as well as access denial warfare to the adversary. This project was conceptualized during ik gujarat government for acquisition of 25 submarines under p25, following it.

In 2005, india and france signed a 3.75 billion dollars contract to build six scorpene-class submarines with technology transfer as an integral part of the contract. The original plan was to induct 12 diesel submarines by 2012, followed by another 12 submarines by 2030. However, due to repeated delays and concerns were raised about the french government’s failure to follow through on its commitment to transfer of technology, forced the navy to rethink the plan and therefore the commissioning of these submarines has fallen far behind schedule and the older p75 was brought Into the new plan project 75i using technology transfer from various foreign manufacturers in june 1999, the cabinet committee on security approved a 30-year submarine building plan that included the indigenous construction of 24 conventional submarines by 2030, which now been reduced to 18

Project 75 I was approved in 2007, is part of the indian navy’s 30-year plan for indigenous submarine construction under which six diesel electric attack submarines of the kalvari class, based on the scorpion class design, were being built. Three of these submarines – kalvari kanderi karanj, have already been commissioned.

Ins vela is the fourth which is commissioned to the indian navy’s western command and will be based in mumbai. The scorpion the gear is under trials and the sixth one ins vag share is under construction. Six of the 24 submarines to be built in india will be nuclear powered. At the moment, india has only one nuclear submarine: the ins arihant, the ins aragat, a nuclear-powered ballistic missile submarine was launched on november 19 2017 and is scheduled to be commissioned soon. Ins, arrogat is an upgraded variant of the arihant class submarine ins chakra.

A nuclear submarine which is taken on lease from russia is believed to be on its way back to the country of origin. According to the report under project 75 alpha, the indian navy aims to procure nuclear-powered attack submarines ssn. The government of india approved the construction of six of such submarines. In february 2015.

The submarine vela has been built by mumbai based mazagon dock shipbuilders, with collaboration with ms naval group of france, mdl and l and t are the only two indian shipyards with submarine building experience and the national strategic assets.

Mdl has delivered two hdw type 1500 submarines and four scorpene submarines to the navy. L t built the holes of four six thousand ton, arihant class nuclear-powered ballistic missile submarines at its hazira facility and integrated them at visakhapanam’s shipbuilding center. Here’S everything you need to know about. Indian navy’s newest induction ins, fella, the ins fella, is equipped with cutting edge stealth and combat technology and is capable of offensive operations that span across the entire spectrum of maritime warfare. Velar is named after a decommissioned submarine.

The previous version of the submarine vela entered service on august 31st 1973 and served the country for 37 years before being decommissioned on june 25th 2010. The capability and firepower of ins fella will be crucial to enhance the navy’s ability to protect india’s maritime interests. These submarines can undertake multifarious missions such as anti-surface warfare, anti-submarine warfare, intelligence gathering, mine laying and area surveillance. They have advanced acoustic, silencing techniques, low radiated noise levels, hydrodynamically optimized shape and have the ability to launch a crippling attack on the enemy using precision guided weapons. It has a length of 68 meters, a height of 12, meters, an overall beam of 62 meters and a draft of 5.8 meters it can reach a top speed of 20 knots, 37 kilometers per hour when submerged and a maximum speed of 11 knots 20 kilometers per hour. When surfaced naval sources said, the submarine can take up to eight offices and 35 men engine power of velar. The submarine is powered by four 4mtu12v396 se84 diesel engines that indicates the higher power and 360 battery cells and a silent permanently magnetized propulsion. Motor the hull, fin and hydroplanes are designed to have the least amount of underwater resistance possible and all equipment inside the pressure hull is mounted on shock, absorbing cradles for increased stealth weapons on velar ins, fella showcases.

India’S notable strides in indigenous submarine construction velar is fitted with advanced weapons and sensors. All of these are part of the submarine tactical integrated combat system or sub ticks. Once a target has been identified, the submarine can choose to engage it with either her sea skimming missiles known as flying fish or heavyweight wire, guided torpedoes. The submarine’s mascot is the sub ray, which is an amalgamation of the submarine and the stingray. The stingray is known for stealth aggression and offensive power.

Its flat body allows it to sit on the bottom of the ocean, camouflage itself to predators swimming above, as it lurks for its prey, underneath the submarine is equipped with c303 anti-torpedo countermeasure system and can carry up to 18 torpedoes or exo-set anti-ship missiles or 30 mines. In place of torpedoes, india has a vast coastline of 7 516 kilometers touching 13 states, but india’s underwater capability falls far short of its requirements. While china has 65 submarines, the indian navy’s fleet of diesel-powered attack submarines has shrunk from 21 in the 1980s to just 17. Today, at least half of the available submarines are old and creaking and undergoing mid-life upgrade to meet its 30-year submarine building plan, which was approved by the cabinet committee on security in 1999. The indian navy needs at least 24 submarines from a strategic perspective.

These will help reduce current dependence on imports and gradually ensure greater self-reliance and dependability of supplies from indigenous sources.