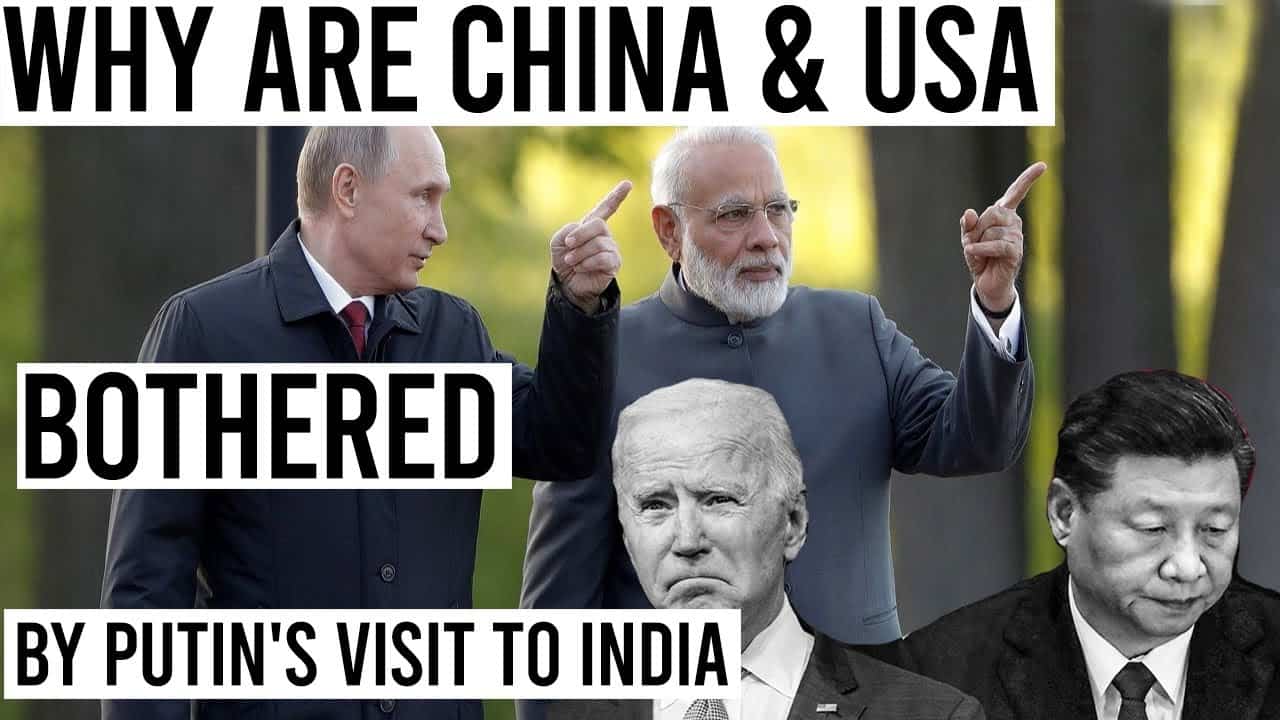 The visit of russian president vladimir putin to india is being eagerly watched by china and the united states. Putin will be in india on december 6th, along with prime minister narendra modi russian president vladimir putin will attend the 21st india-russia annual summit in new delhi. China and the united states are keeping a careful eye on putin’s visit. The significance of putin’s visit is that it coincides with india’s purchase of russia’s s-400 missile system, despite u.s objections, but the question is between the usa and russia, who is more useful for india.

Let’S see why both russia and america are beneficial to india in terms of defence and strategic interests. In december 1971, india and pakistan battled for 13 days over a humanitarian crisis in east pakistan. Now bangladesh one of the shortest wars in history. For months, india has been trying to persuade the world that the enslavement of east pakistan by west pakistan was an emergency. The only country that paid attention was the soviet union indira gandhi.

The indian prime minister signed the india soviet treaty of peace, friendship and cooperation. In august of that year, the soviet union supplied india, with both diplomatic and military support for the war assisting india in its victory against pakistan. When no one else was available, moscow proved to be a solid ally for new delhi. Meanwhile, the us actively rejected india’s demands to address the situation in east pakistan. President, richard nixon and national security adviser henry kissinger saw pakistan as a crucial intermediary in establishing relations with china.

Even today, it was moscow that convened a trilateral meeting of russia’s india’s and china’s foreign ministers on june 23 last year, bringing new delhi and beijing together in the aftermath of deadly clashes between their armed forces in the golwan valley in the disputed territory of ladakh. Moscow has intervened once more in the midst of an increasingly tense international situation. Furthermore, russia promised india that it will supply the s 400 air defense system in response to new delhi’s request. Russia has been a longtime friend of india in not only provided the indian arms to maintain a formidable military profile, but also provided invaluable political support to india on a variety of regional issues. The soviet union provided the k-43, the world’s first true ssgn cruise missile firing submarine on lease.

The submarine which had entered soviet service in 1967 could fire its anti-ship missiles from underwater. The leasing of k-43 is said to have given india first-hand experience controlling a nuclear submarine which aided in the development of the arihant class of nuclear submarines. The k-43 served as ins chakra in the indian navy from 1988 to 1991. New delhi was particularly heavily struck by the disintegration of the soviet union at the end of 1991 because of the post-soviet turmoil in its defense industry. It found it incredibly difficult to maintain its forces.

Furthermore, the kind of political support it received from the former soviet union faded in the face of new realities, implying american influence in russian policies right away. As a result, the russians not only terminated india’s lease on a nuclear-powered submarine, but also scrapped a proposal to offer india with cryogenic engine technology for its gslv heavy space launch rocket. India had little choice but to stick with russia, and it did everything it could to help the country’s military recover by committing to the su-27 program and continuing to buy russian military hardware. However, the relationship between india and russia did not go very far beyond weaponry transfers. Despite numerous attempts, it was unable to generate a large economic component.

India began to consider the americans as a possible supply of weaponry. Indo-Russian relations drifted for a few years under president yeltsin. Despite this, india continued to purchase weapons such as fighters, frigates and medium lift helicopters and 70 percent of its armed forces assets are still russian made. Today, however, it goes to the credit of president putin and indian prime ministers that the relationship has been upgraded to a special and privileged partnership. Russia’S growing antagonism against the west has pushed the country closer to china, the us eu and some european countries, as well as canada and japan, imposed sanctions on russia’s financial, energy and defense sectors in response to its annexation of crimea and involvement in ukraine.

This, combined with the drop in oil prices, had a substantial impact on the russian economy, resulting in a financial crisis in late 2014. Following that, chinese financing played an important role in stabilizing the russian economy, particularly following the 2008 financial crisis to combat u.s hegemony. Both countries insist on multi-polarity. That is why the ric – russia, india, china, brics, brazil, russia, india, china and south africa and shanghai cooperation organisation are so important to them.

Russia believes india is not entirely committed to these forums because of its developing ties with the united states. Furthermore, the countering america’s adversaries through sanctions act and iran’s sanctions limit and harm indo-russian cooperation. India must find a means to deal with the tensions between russia and the united states. Russia has been obliged to deepen cooperation with china as a result of increased u.s pressure.

Another factor driving closer ties between china and russia is the volatility of mineral oil prices and russia’s growing reliance on chinese consumption. However, there are significant contrasts between the two countries on a number of crucial matters. China, for example, does not consider crimea to be part of russia, while russia has taken a neutral stance on china’s claim to sovereignty in the south, china, sea, india, u.s ties is a counterbalance given. Russia’S current ties with china, its limited position in asian geopolitics and its limited presence in the indian ocean.

India sees its current engagement with the us as having more leverage in challenging china’s forceful tactics. India and the united states have progressed their defense. Trade ties as well as their broader security alliance, india’s defense contracts with the? U

S currently total 20 billion dollars, in addition to important defense and strategic agreements such as the logistics exchange, memorandum of agreement, lamoah communications compatibility and security agreement, com, casa and basic exchange and cooperation agreement becca alongside the industrial security agreement. Isa given growing defense engagement between the two countries, the united states designated india, a major defense partner in 2016 and elevated india to strategic trade authorization tier 1 status in 2018, which provides india ease of access to military technologies.

These strong connections may be the outcome of the us sharing india’s fears about china’s expanding footprint in the indian ocean region. China’S aggressive economic endeavors, such as the belton road initiative and securing access to military bases and critical ports have heightened these fears to counterbalance chinese influence. India’S policy has included improving ties with the united states. The strengthening strategic cooperation between india and the united states has alarmed russia, which believes that india is progressively moving toward the western camp by urging india to join the brics and shanghai cooperation organisation. Russia hopes to keep india on its side.

However, it is concerned that the deepening of the indo-us cooperation may have a negative influence on russia, the formation of quad as a security framework added to russia’s apprehensions and exacerbated its fictitious strategic ambiguity. However, it is important to note that quad is in place to counter china’s aggressive and imperialistic plans in the indo-pacific area. Quad also encompasses other areas of collaboration such as climate change, sustainable security and so on. As the recent summit underlined, russian foreign policy makers are mistaken in believing that quad is directed against them. Russia’S strategic concerns are mostly based on fictitious threats rather than real ones.

As a result, india is in a pickle what’s the best way to get between russia, china and the united states. India has little choice but to maintain close ties with both the united states and russia, as well as manage its tense relationship with china. Similarly, russia cannot afford to lose india, because the country is a major market for its military hardware and technologies, nuclear reactors and diamonds. Furthermore, india is on the rise and has a sizeable market that russia may tap into. Russia cannot be content with its growing reliance on china, and its place is a subordinate player in the sino-russian cooperation for russia.

India provides the required balance. Dmitry trinin, director of the carnegie moscow center said. Our chinese neighbours are not much happy with us supplying arms to india. The chinese are less overt in their pressure and they are less public about that, and they also know that trying to pressure russia will be counterproductive. He added russia’s relationship with india is unshakable.

It is not a country that can be dictated to by another country, india and russia have to rethink their ties in a changing geopolitical environment. Russia’S relations with india should not be defined or guided by those with china and the united states. Similarly, india’s relationship with russia should not be molded by its relations with china and the united states.