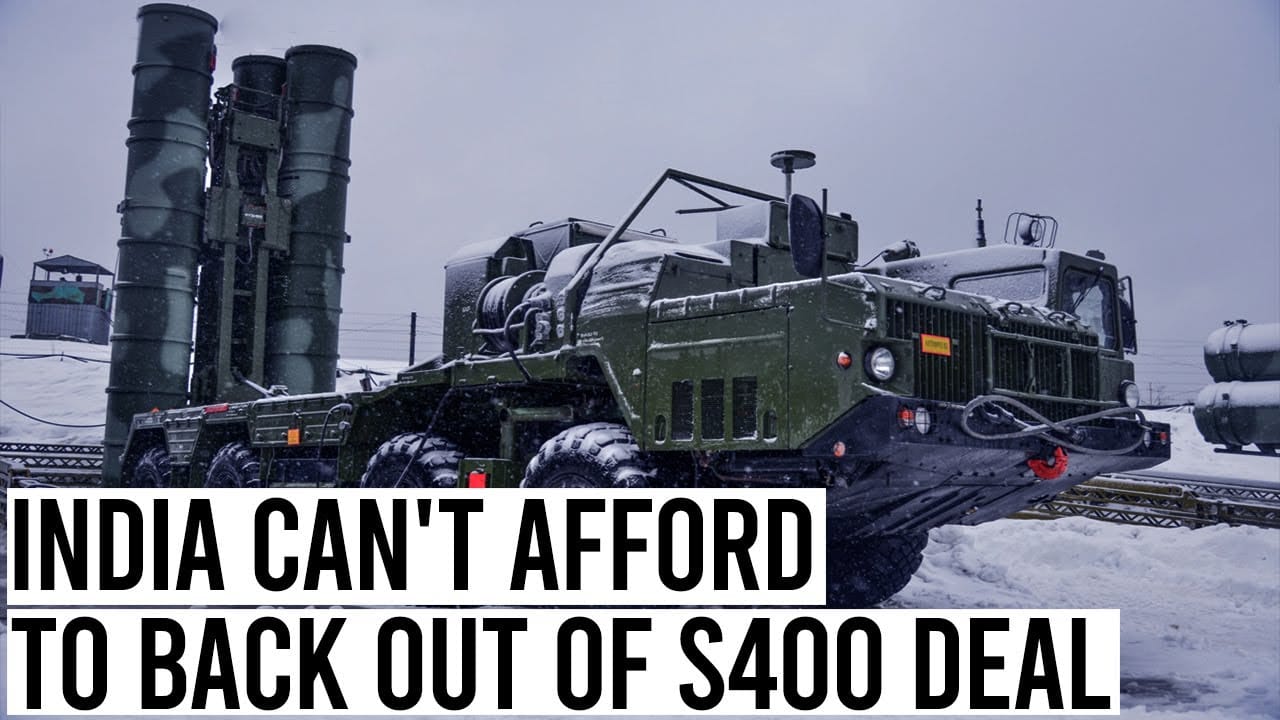 Despite the threat of u.s sanctions, India hasing to deal with Russia to buy the s-400 air defense missile system, so why can India just not afford to walk away from its s-400 missile agreement with Russia? The Russian S-400 missile defense system is regarded as among the best in air defense technology. The S-400 is one of the world’s most sophisticated surface-to-air defense systems and India’s neighbor. China also has the same system.

The two countries fought a war in 1962 and routinely saw skirmishes on their border. For India, it was imperative to boost its defense capabilities, especially in view of a possible two-front conflict with Pakistan and china. However, at every India-US meeting, a common question is raised to u.s representatives by the presses whether there would be sanctions on India as per CATSA. The answer to the question is: in the future, carter was signed into law in 2017 to punish Russia for its activities in Ukraine and Syria.

Washington has put several Russian firms under sanctions. It also prohibits any country from signing defense deals with Russia, so it is essentially a fight between the united states and Russia, with other countries acting as players, and India is one among them. Indian officials, on the other, have consistently claimed that the indo-Russian agreement for the S-400 was inked in 2016, but CATSA was implemented in 2017. As a result, the transaction predates carter. They further said that India has an independent foreign and security policy and that the nation is free to choose the weapon systems it needs and the countries from which it would buy them.

India considered the S-400 to be the best in its class. It will be a significant boost to India’s defense and even more effective than the u.s systems already on the market and therefore fit for its national needs, and also, its air force is facing a shortage of squadrons. It would need in the event of war with both china and Pakistan. India will not back down.

It will never terminate the pact because doing so would jeopardize its ties with Russia. Most importantly, it cannot risk its armed forces platforms at risk. Nor will India surrender its strategic autonomy and become dependent on The US. It has explained this clearly to the: u
S leadership: on the contrary, The US would lose a close and strong ally which would leave Russia and china smiling because currently, they are close allies in the quad, which is a diplomatic grouping involving a military element aimed at containing China. Although the creation of orcis would enhance Australian naval power in the coming decades, the sole military and economic power in Asia to counter China is India and u.

Understands that it cannot ignore Indian interests. So the final call is that of president Joe Biden, and the u.s president has the authority to give a waiver under carter, just as The US is concerned about India acquiring S-400 missiles from Russia. China is concerned about Moscow selling weaponry to New Delhi. So what is the difference between India’s and china’s S-400 missile systems, and in what terms India has a Chinese edge s?

400 Chinese officials reached an agreement to acquire the S-400 missile defense system in 2014, and in 2018, it acquired its first system. China has been operating it for three years, but the system differs from India’s s-400. Let’s see the difference between the s-400 missile system of both countries. There is an international regime known as the MTCR missile technology control regime. The regime was formed in 1987 by the g7 industrialized countries.

The match aims to restrict the proliferation of missiles, complete rocket systems, unmanned air vehicles, and related technology. The regime urges its 35 members, which include most of the world’s key missile manufacturers, to restrict their exports of missiles and related technologies capable of carrying a 500-kilogram payload at least 300 kilometers or delivering any type of weapon of mass destruction. Russia is a signatory of the match, and china is not so. As per the regulation, Russia can’t sell missiles of 400 kilometers range to china. As per the deal between China and Russia.

China has purchased six battalions of s-400. Each battery in china consists of a mobile command center, different types of radars, and six launches. Thus, in total, china possesses six mobile command centers. With around 12 radars and 36 launches, each launcher can launch four missiles at a time; then, in total, china can fire 144 missiles at a time. Technically, China has only missiles with 40 kilometers, 120 kilometers, and 250 kilometers ranges. Hence china’s track and target of only up to 250 kilometers of range Indian S-400; India, being a member of MTCR, will get missiles of all ranges, that is, from 40 kilometers to 400 kilometers from Russia.

India will get five battalions of S-400. Each battalion will have a mobile command center, different types of radars, and eight launches. In total, India will have five mobile command centers with up to 10 radars and 40 launches. Each launcher can launch four missiles at a time. Then, in total, India can fire 160 missiles at a time S-400 are capable of engaging aerial targets, including aircraft, unmanned aerial vehicles, and ballistic and cruise missiles, within a range of 400 kilometers at an altitude of up to 30 kilometers and can fire three types of missiles To create a layered defense, the radar can detect and track aircraft rotorcraft cruise missiles, guided missiles, drones and ballistic rockets within the distance of 600 kilometers.

The system was specifically designed to detect and destroy highly advanced fighter jets, such as f-16 and f-22, and missiles, such as tomahawk, so India clearly would get an edge. How many batteries are there? In India’s one battalion of S-400, India has bought five regiments or battalions or forty launches. Each regiment will have two batteries with four launches each and about one thousand missiles. Seventy percent of purchased missiles are a very long range.