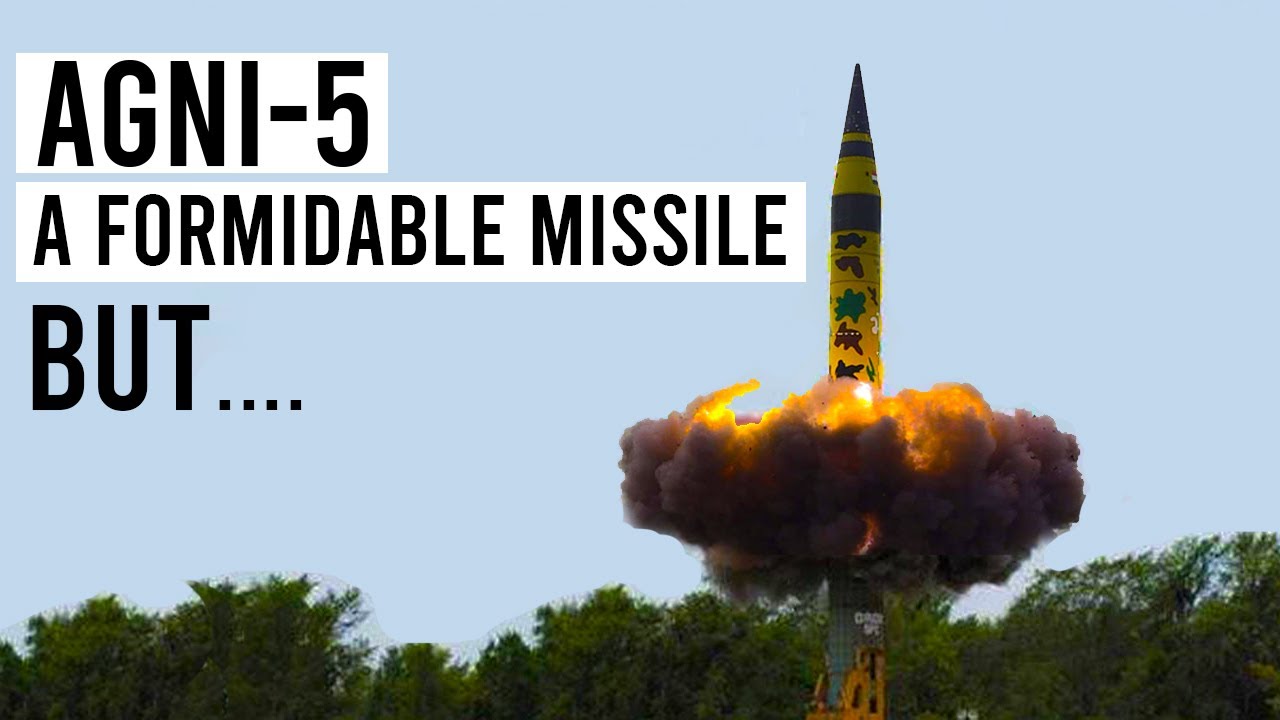 Amid escalating tensions between New Delhi and Beijing, India has surprised everyone. By successfully testing the Agni 5 missile, Agni 5 was successfully launched at the October 27, 2021 meeting. All of the goals for testing the long-range surface-to-surface ballistic missile reinforce the country’s indigenous missile capabilities and further bolstering the country’s credible deterrent. What makes china concerned about India’s Agni 5 missile Indian intercontinental ballistic missile Agni 5 is a cause of concern for china due to its firepower. The Agni 5 project was aimed at enhancing india’s nuclear deterrence against China, which has missiles like Dongfeng 41.

With ranges between 12 000 to 15 000, it can hit its target at a speed of twenty-nine thousand four hundred and one kmph and India’s agni five is capable of striking a target more than five thousand kilometers. It is widely regarded as a strategic missile targeted at china, as it can reach almost all parts of the Chinese mainland, especially burning major industrial cities of china to ashes. This missile is capable of dropping nuclear warheads and its aim is accurate. The missile is about 17 meters long two meters wide and has launch weight of around 50 tons and can carry a warhead of about 1 500 kilograms, making it one of the most powerful missiles in the country, though officially an ICBM needs a missile to have a range of at least 5 500 kilometres, the Agni 5, is India’s closest contender for an ICBM. It can bring the northernmost part of china under its striking range, and also it can reach countries across other continents, including details of Africa and Europe.

Chinese official media claimed that Agni 5 has a range of up to 8 000 kilometres and is free. It is a cause of concern for China; unlike the other Agni series missiles, the latest one, the agni 5, is the most modern, incorporating several new technologies. In terms of navigation and guidance, warhead and engine in the first agni five trial, several innovative technologies, developed indigenously, were successfully tested. The redundant navigation systems, as well as the very high accuracy ring laser gyro-based inertial navigation system and the most recent and accurate micro navigation system, ensured that the missile reached the target site within a few meters of precision and with mirv capability of agni 5 will Give India the much-needed deterrence. In contrast, single-warhead missiles are generally launched against one target. The mirv missiles can dispense warheads against multiple targets.

India currently possesses the Agni series, which includes the agni one, with a range of 700 kilometres; the agni 2, with a range of 2 000 kilometres; the agni 3 and agni 4, with capacities ranging from 2 500 kilometers to more than 3 500 kilometers importance of agni 5 for India, agni 5’s agility is attributed to the fact that it is a canisterized missile. It means that the rocket can be launched from road and rail platforms, making it easier to deploy and launch at a quicker pace. While India is one of the few countries with arguably ICBM capabilities, the next version of the missile Agni-6, which is now under development, is estimated to have a range of roughly 8 000 kilometers and in terms of hypersonic missile technology which just tested by china. India is one of a few significant contenders working on it, even if it falls behind china, the us and Russia. So what exactly is a hypersonic glide vehicle as tested by china?

The financial times reported that china had in august tested a new hypersonic missile which is nuclear-capable, while china denied the report claiming it to be a spacecraft and not a rocket, it demonstrated the capability in hypersonic glide vehicle technology, which raises strategic concerns, not just for Its neighbours, like India, but even its rivals like us. So first we must understand what hypersonic weapons is. Hypersonic weapons are often defined as fast low flying and highly maneuverable weapons that are too fast and agile for standard missile defense systems. A hypersonic missile travels at speeds of mach, 5 or higher. The term hypersonic describes any speed faster than five times that of sound, which is roughly 760 miles or 1220 kilometers per hour at sea level, meaning these weapons can travel at least 3 800 miles per hour.

Also in July. It successfully tested the zircon, a ship-launched cruise missile, said to be capable of striking ground and naval targets. The impact of hypersonic weapons on national security, traditional platforms, such as crews and ballistic missiles, have been around for a long time allowing the world’s leading military powers to develop significant capabilities to detect and intercept them. However, by combining the speed of ballistic missiles with the stealth of cruise missiles, hypersonic missiles provide the ability to avoid such anti-missile. Defenses hypersonic weapons can nullify existing missile defense systems, destabilize military balances abroad, and alter deterrence strategies heavily.

Even the united states is not equipped to deal with the threat posed by hypersonic weapons due to their high speeds, maneuverability and the low altitudes at which they fly. Therefore, china’s nearly successful test has caused concern among military countries across the world. Their maneuverability further complicates the issue of detection and interception of hypersonic weapons. A hypersonic vehicle’s target can be changed, mid-flight, which, compounded by hypersonic speeds, makes early detection difficult to impossible. China, the us and Russia have the most advanced capabilities and several other countries are investigating the technology, including India, Japan, Australia, France, Germany and North Korea, which claimed that it successfully tested a new hypersonic missile called huasong-8.

However, effort has been put into figuring out how to defend against enemies, hcms and HGVs. The defence advanced research project agency, DARPA of the united states, is currently developing the glide breaker, also known as the hypersonic weapon killer. Darpa awarded Northrop Grumman 13 million dollars to study defense against hypersonic weapons. Darpa wants to test systems capable of countering hypersonic weapons as they zip through the atmosphere. At more than five times.

The speed of sound glide breaker could be used against new Russian and Chinese weapons, including Moscow’s new Mach 27 avant-garde. Hypersonic missile. You