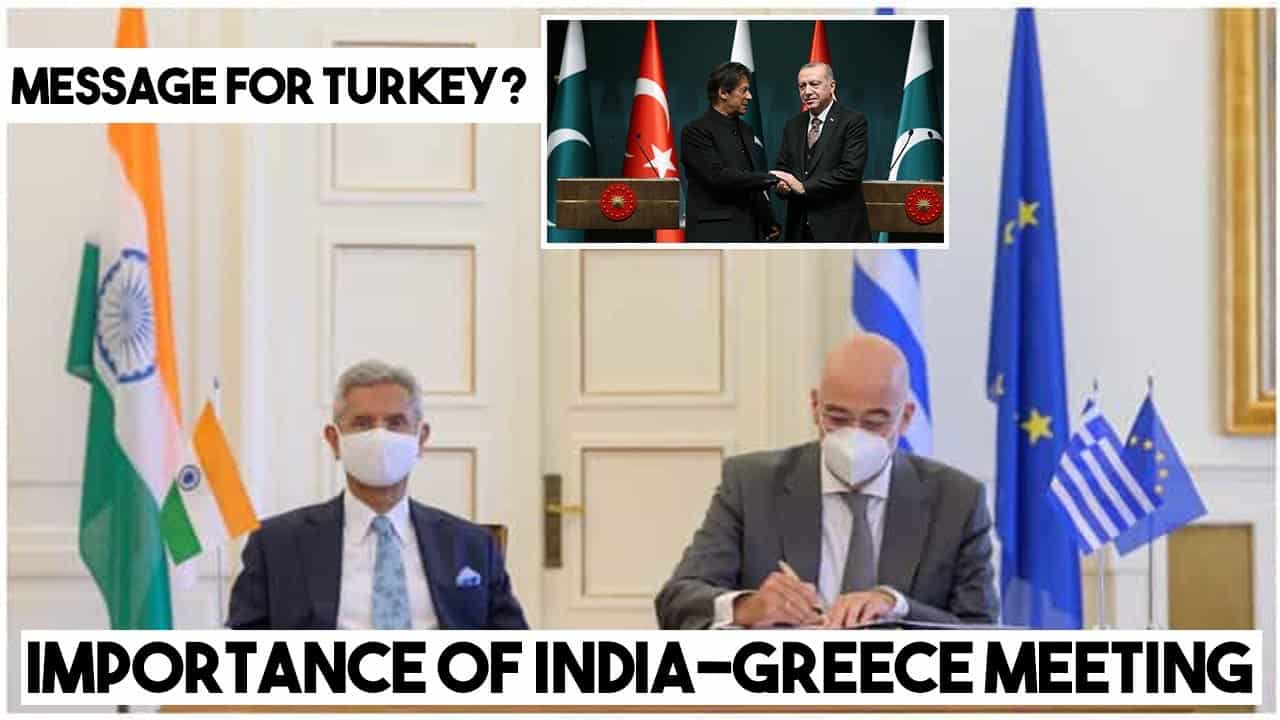 India and Greece held a brainstorming session on the threat to the territorial integrity of nations and threats posed by radicalization, violent extremism, and terrorism. In the backdrop of turkey’s territorial claims in the Mediterranean region and alleged support to radical groups and Pakistan on the kashmir issue, the ministry of external affairs said both sides emphasized respect of sovereignty and territorial integrity by all members of the international community. Both sides discussed the recent developments in the eastern Mediterranean, Cyprus, and Libya. These issues of the principle of territorial integrity and the rise of extremism were part of the agenda. When external affairs minister s jaishankar met his counterpart Nico studies in Athens during his June 25th to 27 visits to radicalism in south Asia during jai Shankar’s meetings, both sides agreed that the rule of law and respect for sovereignty and territorial integrity are fundamental principles of international Relations that all both countries must observe recognized the threat posed by radicalization, violent extremism as well as terrorism, including cross-border terrorism. At the same time, turkey was not named, but the message was clear given about turkey’s deepening ties with Pakistan and support for radicalism in south Asia.

The reference to Cyprus and principles of international relations in the minister of external affairs statement indirectly referred to the role of turkey concerning several issues relevant to India and Greece. Turkey has refused to toe the Indian line on issues like kashmir and has emerged as one of the front runners in managing the emerging situation in Afghanistan. It has repeatedly supported the Pakistani position on kashmir, drawing strong protests from India’s indo-pacific area. Interestingly, throughout Jai Shankar’s visit to Athens, each side additionally shared views on the indo-pacific area. According to the statement, both sides noted with satisfaction the convergence of each other’s vision for a free, open, inclusive, and cooperative indo-pacific, ensuring connectivity and growth for all in the region.

This statement is significant amid india, european union joint connectivity initiative, including in the indo-pacific region, to balance china and greece’s close ties with beijing role of china in greece. Greece is part of belt and road initiative. Greece deepened its economic ties with beijing in the wake of the financial crisis, and investments from china represented an important source of income for athens. China bought most of greece’s main port, and now it wants to make it the biggest in europe. The investment of china ocean shipping group company in perez port has been acknowledged as one of the most successful foreign investment projects in greece over the last 13 years.

Since the greek financial crisis, beijing and athens have deepened their links. Greece in august 2018 announced that it was formally joining china’s belt and road initiative in greece’s perea’s port. China’S shipping firm costco took a majority stake in 2016.

The port is at a strategic location between the asian and european continents, and in recent years, china has made a number of different major investments in greece, including in energy and real estate, and india, on its part, wants to build ties with greece in the shipbuilding sector. Agreement with india, mr dendius, signed and handed over the agreement on the international solar alliance to the visiting side.

Both sides agreed that this will assist the two countries in realization of the energy goals set by the respective governments to make renewable energy a significant part of the energy supply. Both countries also discussed the need to work towards an agreement that will allow orderly and legal ways of migration and mobility in the globalized world.