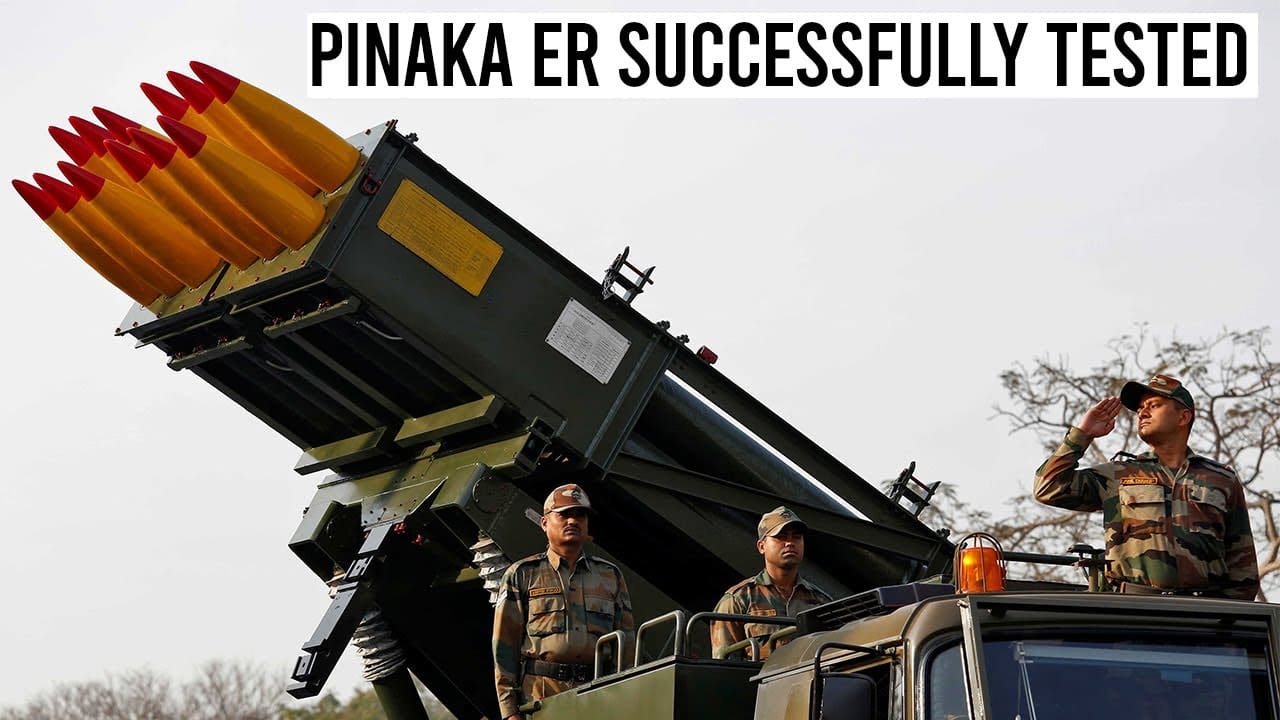 On Saturday, the DRDO tested the extended range pinaka er multi-barrel rocket launcher system. Pinaka integrates state-of-the-art technologies for delivering superior combat performance; the DRDO’s laboratory, armament research and development establishment, and high-energy materials research laboratory have designed the system. The technology has been transferred to the Indian industry. The pinaka er is the upgraded version of the earlier version of pinaka, which has been in service with the Indian army for the last decade. The system has been designed in light of emerging requirements with advanced technologies. Enhancing the range on June 24th 2021, the DRDO successfully fired 25 indigenously developed pinaka mki enhanced variants at a range of 45 kilometres in quick succession mode as part of a saturation attack simulation. On June 25th, 2021 DRDO successfully test-fired a 40-kilometre range 122 millimetres Caliber rocket designed to replace the Indian army’s older bm-21 grad rockets on December 11th 2021, two different variants were simultaneously test-fired from Rajasthan’s Pokhran range.

First, one was done by solar industries for pinaka mark 1, enhanced with a range of 45 kilometres. The second one was called pinaka adm, made by yantra India limited, in which 96.6 of dual-purpose improved conventional munition exploded instead of the required benchmark set at 90 percent, thus decreasing the failure rate. Both tests were successful. Pennaka MBRL design pinaka was developed to replace the Indian army’s bm-21 grad multiple rocket launcher weapons.

Pinaka is a multi-faceted system that includes high-energy propulsion, submunition warheads, servo, and controlled launcher configuration. Each pinaka rocket has a payload capacity of 100 kilograms and a range of 40 kilometres. A single pinaka battery can neutralize a 700 meters times 500 meters surface area, with a circular error probability of one to two percent of the range. The system can engage targets. pinaka is a complete MBRL system.

Each pinaka battery has six launcher vehicles, each with 12 rockets. Six loader replenishment vehicles, three replenishment vehicles and two command post vehicles, one standby with a fire control computer, and the digicore emit radar. The launch system can fire our salvo of 12 rockets in 40 seconds; the launcher turns 90 degrees left or right from the centre line and can elevate up to 55 degrees. The launcher has four modes of operation that is autonomous, stand-alone, remote and manual in autonomous mode. The fire control computer controls the launcher independently.
The operator enters commands onto the console in the stand-alone mode warhead variations. The rockets can be outfitted with various warheads, including pre-fragmented, high-explosive anti-tank bomblets, anti-tank mine let warheads, anti-personnel mines, incendiary practice and pilot shots. The pre-fragmented warhead has 25 to 30 per cent more destructive power than a conventional warhead. The HMX-based composition is used in anti-tank bombs, blitz or minarets to achieve 150 millimetres armour penetration pinaka launch vehicle. The pinaka launcher system is mounted on the indigenously built Tatra and bml 8wd.

The vehicle can carry a payload of 12 tonnes. It is outfitted with an onboard generator that provides primary power for launcher operations. A microprocessor-based thyristor power unit, a joystick controller and a manual backup system are also aboard the vehicle pinaka development. Information development of pinaka began in 1986 at a DRDO facility in puna, known as the armament research and development establishment. DRDO was in charge of the overall design and development, tata power, strategic engineering, division, Larson and Toubro, and the ordnance factories board developed the subsystems and components. pinaka is produced at an average rate of one thousand rockets a year at the ordnance factory in Chanda, Maharashtra.

During the cargo war in June 1999, penance MBRL’s combat capabilities were tested. In February 2000, the first pinaka MBRL regiment was formed, and the development trials were held in Pokhran in September 2012. At the Chandan firing range in September 2020, the authority containing sealed particulars for the penance weapon system was transferred from the DRDO to the directorate general of quality assurance. The transfer signifies the successful establishment of pinaka rocket production, launches battery command posts, loader cam replenishment and replenishment vehicles and quality assurance processes, and in august 2020, the Indian government signed a 353.5 million dollars contract with tata power, company lnt and Virat earth movers for the delivery of Six regiments of pinaka mki MBRL systems to the Indian army by 2024;